“Do not be afraid to grow older. Age brings wisdom, maturity, experience, understanding, elegance, beauty and everything in between.”

A chameleon that has already been thousands of women, a true storyteller that thrives only when she is unfolding an intricate tale and an actress with an unwavering passion for the camera – she is an acclaimed starlet that has carved her name into Arab halls of fame of both cinema and drama over the course of 40 years. After portraying a wide spectrum of relatable characters, Sawsan Badr built a strong rapport with her audience, becoming rather a beloved member in each family around the Middle East. With her smart short white hair contributing to her sophisticated aura, Badr is an open book as she delves into her memories of the lifetime well spent under the spotlight. She might not own a single personal photo; yet, she keeps what she describes as her true treasure. “I have a huge box full of tokens that I have kept from all of my roles and projects. This box is my entire lifetime. It is the closest thing to Ali Baba’s cave, full of treasures that I have collected over the years.” She adds “pictures with each filmmaker that I have worked with, souvenirs from each character that I have portrayed – is it a representation of how I have spent the past 40 or 50 years.” Hid into the wooden box are roles that landed her national recognition and others that stirred controversy. However, out of her many roles, the actress still remembers a few that changed who she was and contributed to her growth as an artist.

In 1996, Badr stared in a play that did not only challenge rules, but also demanded instrumental change. “Dokos El Esharat W El Tahawolat “The Rituals of Signs and Shifts” redefined the static nature of national censorship at the time. After years of refusing to delve into religion, politics and sex – this play succeeded in discussing these three topics with unlimited freedom as well as undivided professionalism and objectivity.” Written by the acclaimed late Syrian playwright Saadallah Wanos, the bold play stirred a heated conversation around the region. “At the time, it was only performed in Egypt and Lebanon, where it was directed by the extraordinary Nidal El Achkar. It was a brave and influential play that took its time to be approved by the national censorship. We were even asked for an assessment performance to be attended by a special committee before its public debut. However, at the end it was approved without the omission of even one word.” The actress’s face lights up as she remembers her role, El Massa, a powerful woman that stayed with her for three months after the shows were concluded. In the same emotional manner, Badr plunges further into her memories; remembering yet another powerful role. According to the artisanal actress, portraying Fatma in El Abwab El Moghlaka (1999) “The Closed Doors”, also left its mark on her for quite some time. She describes her as a suppressed and wronged woman that only wanted to love and be loved in return, yet she was killed for just doing so. Additionally, she remembers Badrah in Al-Rahaya (2009) and Fatma in El Shouk (2011) “Lust”, whom stayed with her for the longest while. “Actors often find it easy to get into character; however, leaving strong personas behind is not always easy.”

Humble and on a mission to relentlessly pursue her love for acting, Badr states that she still considers herself a new talent as she walks into a new age, which is destined to bring her a new genre of roles. Hungry for experimentation and artistic expression, the star laughs as she shares that she wants to play a thousand more characters, with zero intention to leave any good script untacked. “I do not think that I have even come close to everything that I want to do. I want to play every single good character that is being written now. I love acting and I admire what I do, nailing a role brings me joy and satisfaction. I never want to act because I have to; instead, it is a pleasure for me.” Despite her eagerness, Badr does not always come across roles that rise up to her standards. Based on her current experience, the actress believes that scripts developed nowadays do not quite create a powerful space for senior female roles. “In general, the industry has a crippling obstacle, once an actress approaches the end of her 30s a fundamental issue starts taking hold of her career. Because, filmmakers often want the leading actress to be a young woman in her 20s. Nevertheless, this is not the way it should be, this is not the way it is everywhere else.” A true aficionado, Badr’s love for the industry also makes her a well-educated member of the audience. Accordingly, she uses a movie that she enjoyed recently as a testament to the importance of increased diversity. “Sofia Loren just starred in a film called The Life Ahead (2020), she plays a leading role, which was written for a woman in her 70s. Utilizing the experience and wisdom of a lifetime in front of the camera, Loren gives a masterclass in acting. It is an impressive articulate production.” The award-winning actress adds with much determination taking hold of her features that It is quite difficult for her to find a suitable role that was written for a woman in her age; yet, also instrumental to the production in general and has an artistic value. Leaving her with an unpleasant choice to be made, either to choose to sit and wait for as long as it takes to land a good suitable role or to compromise and accept the minimum level of quality. “Most recently, I was lucky to play Ragaa in Khait Harier (2020) “A Silk Thread”, it was a respectable and important role that kept me engaged and motivated to give my best. In general, I cannot deny that I have been quite lucky that every time there is a role for a woman in my age, my name is often at the top of the list.” 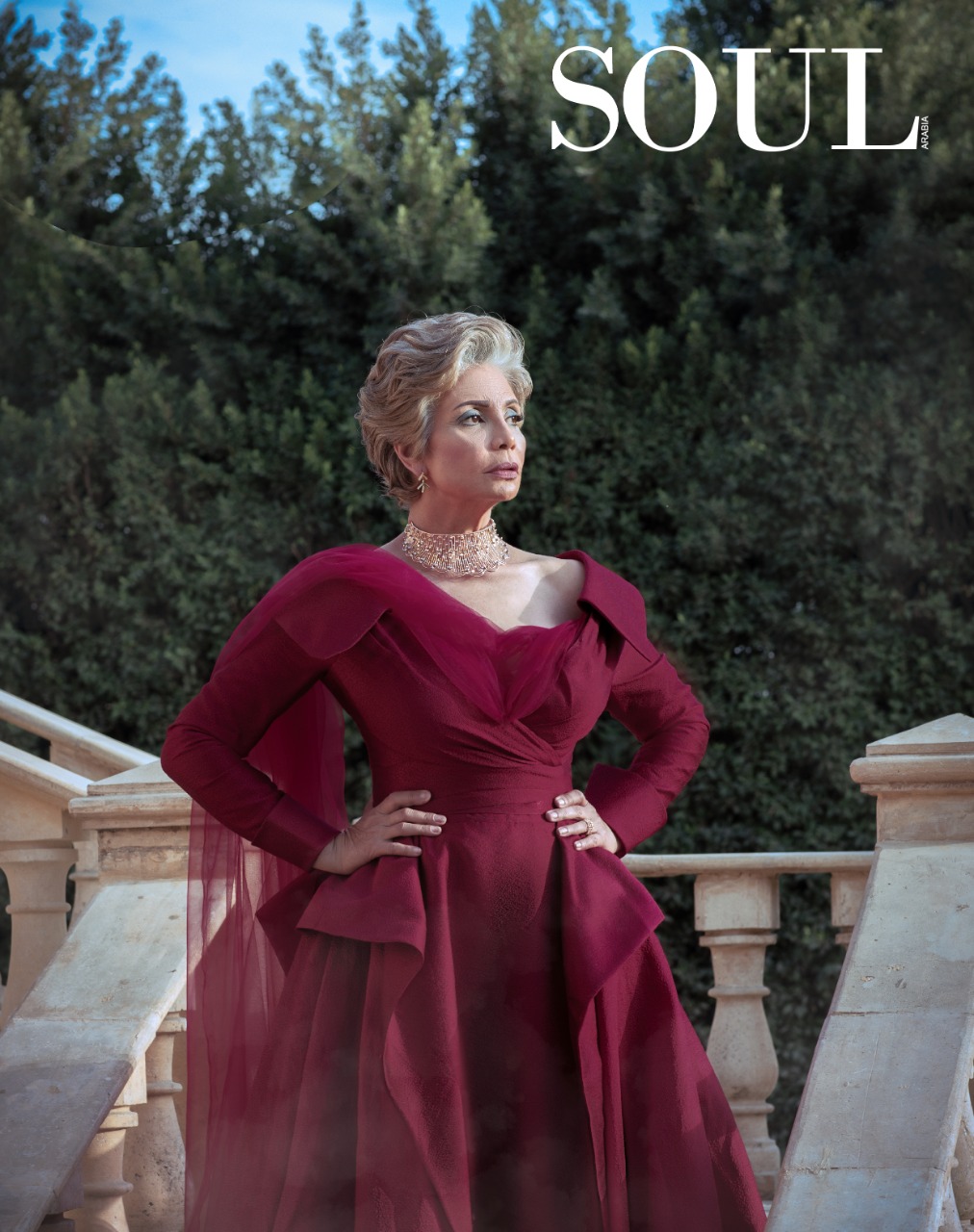 Dubbed as “the fugitive from the museum” by the late acclaimed filmmaker Shadi Abdelsalam, Badr has been regarded as an Egyptian beauty icon for her authentic features, intuitive eyes and warm smile. Championing a natural approach to aging gracefully, the actress is currently an advocate of embracing age and standing confidently in the face of stereotypes. “I have a principle; I am the first person that sees me every single morning. Hence, it is natural to want to be happy when I see myself at the beginning of each day. It is everyone’s right to be happy when they see themselves in the mirror every morning. If this happiness will result from a plastic surgery then be it, if your wrinkles bring you this satisfaction then keep them, if a certain hair dye will do the trick for you then do it.” A true believer in everyone’s choice to define personal happiness as long as it does not harm or influence the freedom of others, the silver-screen star chooses to maintain her natural grey hair. “It is how I look and I am happy about it. It is my current reality and I want people to share with me my real self. I want people to love me for who I am and not how I look; true admiration should not be related to looks.” Looking ahead, the actress is currently working on an upcoming TV production, which she describes as ambitious. In the meantime, she is determined to keep spreading a message of confidence and self-love, encouraging women to find beauty in their age. “Do not be afraid to grow older. Age brings wisdom, maturity, experience, understanding, elegance, beauty and everything in between. Growing older does not mean that we should give up on everything. On the contrary, it is the perfect timing to go out, enjoy life and experience new things. Laugh fully and enjoy your growth.” With 445,000 followers on Instagram, Badr is keen on maintaining a genuine conversation with her audience.

Having only one official Instagram account, the actress personally replies to all comments and messages. When asked about online bullying, Badr shares that she often prefers to reply with explanations because some negative comments might result out of a misunderstanding. However, she is a firm believer that even in time of disagreement no one is entitled to hurt others. “We can express our thoughts without crossing any line. No one is allowed to address others with extreme aggression even if they have opposite ideologies. I am always surprised by those who post negative comments and insults casually. I do not understand someone’s need to look for those who have selected a different path for themselves only to insult their beliefs and choices. Everyone is entitled to his or her opinion but there is a minimum level of respect that we all owe each other.”