Success is where passion and persistence meet, and in our new edition, we dug into the story of an accomplished and influential character, who combined her field of study, love and fondness for fashion, to build her own empire from scratch, and become one of the most noteworthy influencers and content creators on social media within a few years and also managed to create her own brand.

Raised in a family that values ​​and encourages art, Jordanian influencer and graphic designer Haya Awad believes that the basis of creativity is home and education, as she says in her interview with Soul Arabia: “My family has given me freedom of thought and expression, the word ‘no’ is not our dictionary, they have always encouraged any new ideas in my mind, and this influenced my choices in life, both in my studies and in the art exhibitions I do. This open-minded approach influenced me to follow the same path with my daughter now, as I give her freedom to express herself, and encourage her to be creative because I know that eventually, it will create something beautiful for her.”

Haya Awad is multi-talented and loves different types of arts, including playing the keyboard, piano, drawing, and singing, she also has gained experience in more than one field, in addition to studying drama and obtaining a master’s degree in marketing. She admits that the only thing that expressed her true identity was graphic design. “I am a creative director primarily, because it is my main passion, and I feel that fashion brings me back to graphics because it is the field that I love, and I have studied and worked in it for more than 12 years, as it combines design, colour, drawing, music and animation as well.”

From a young age, advertisements attracted Haya’s attention to the point of obsession, and even before the emergence of social media, she always kept all the latest issues of magazines, and cut out what she loved from them to use in collage arts, while she was always wondering about the way of making the advertisements that fascinated her, to find out later on its maturity that it is done by graphic design; “Graphics helped me develop my skills and establish my own fashion line, as I managed to make my own logo, identity, and marketing. It is the future as graphics are the language or tool for Digital Live.”

Haya established her brand “fashionattak” in 2012 with the advent of Instagram, she wanted to present a distinctive product that integrates different designs bearing the Arabic identity but with a western flavor. Haya stresses that her appearance always expresses her personality, as she believes that fashion represents everything that is new and keeps pace with modernity. “I don’t like the ordinary and I prefer everything that can be described as dazzling and new, I also love all that is elegant, strange, and different,” she says.

Belonging to the Libra sign known for their intense romance, Haya says that the presence of love in her life is clearly reflected on her; “I am a sensitive and romantic person, I love being in love, beginnings, and I enjoy doing all the romantic things, to always be in a great mood. My love for fashion is the reason for my success because the person’s passion, honesty, and love for his work drive him to achieve all his dreams.” 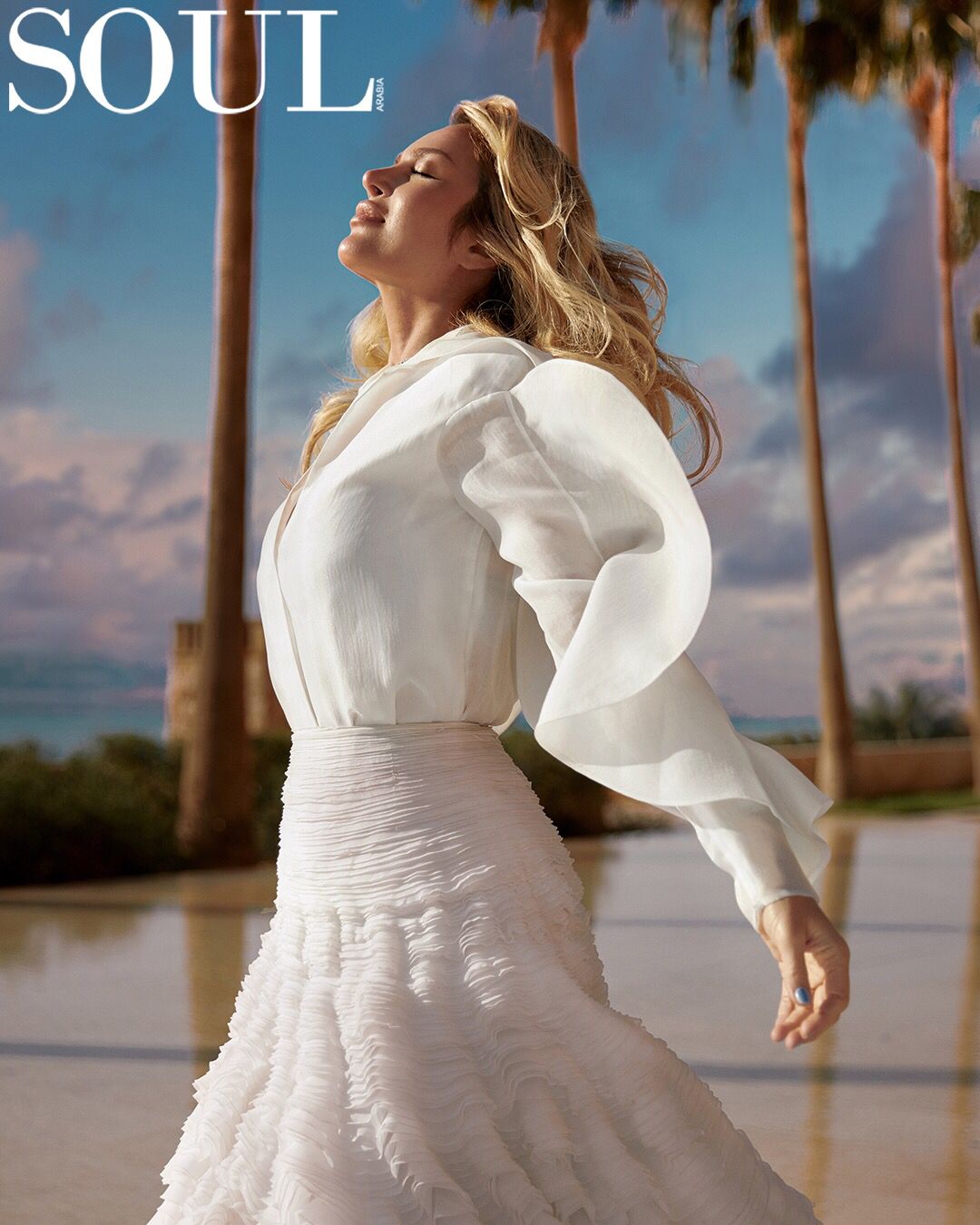 Social media gave Haya Awad the opportunity to become an inspiration model, as she realized, since preparing for her first art exhibition, the importance of magazines and newspapers in promoting her talent, but she preferred to do the marketing task herself, and when she had her own account, she knew how to use it in the best possible way. Haya says, “Social media is the medium that conveys my ideas, my art, and my passion to people, and since I have the tools, my expertise in marketing and graphic design and my love for photography and also a private fashion label, I handled every aspect of directing, design and branding, it is best that The person is marketing for himself, because the result will be great, and I thank God that I reached my goal globally and not only locally, with the help of my friends in Jordan and abroad.”

Haya Awad enjoys the love of a wide audience on social networking sites, she has the ability to create useful and unique content, and believes that everyone who wants to stand out should not imitate the stories or identities of others, but rather must be creative and innovate. She adds, “I don’t like to repeat myself, I consider Instagram my workspace, which I respect and love to give my best. I am eager to present something new and special every time, the quality of the content is high and charming to the eye, and I always receive feedback about how much it carries positive and inspiring messages. 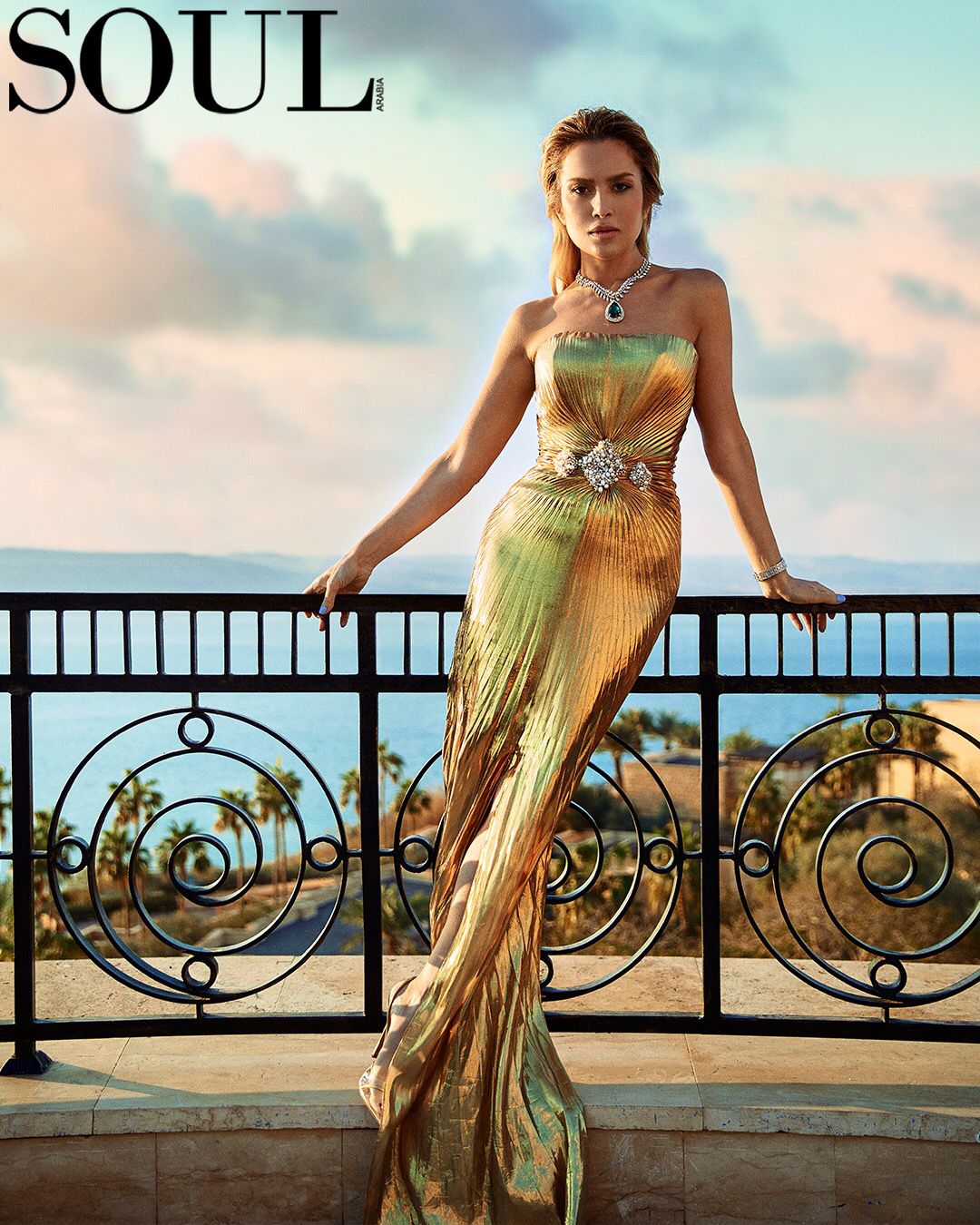 Creating content is a daunting task; in Haya’s opinion, social media has opened the door for every talented person to succeed or express their ideas, she says: “My content is a professional material, for people it may be just images or videos, as for me it is ideas and messages that I want to convey, there is nothing random I share on my profile because I respect my followers.”

As a social media influencer, Haya Awad sometimes is exposed to false lights; “It’s a game, we have to accept its rules, privacy violations happen everywhere, and it’s easy for anyone to take my pictures in the car, street or restaurant, as well as exposure to rumors. Public figures are vulnerable to anything, especially gossip, as every topic concerning them develops and grows without any basis, so I have to accept this burden because it is part of the game.”

Talent, intelligence, passion, and ambition are all factors that contribute to success and differ from one person to another. Haya’s special recipe is persistence, as she confirms that she is a person who insists on success, and has the ability to see the final results and work based on them, in addition to perseverance. Haya Awad is keen to send messages to all women, whether through her accounts on social media, or through her brand. She says: “Women are strong creatures, have extraordinary endurance and great energy in giving and creativity, so we must remain strong,” adding: “Women are vulnerable to any bullying, especially in Arab society, which sometimes makes them feel less or not qualified to succeed because of family tasks and raising children, so I always love hearing inspiring women’s stories and I hope my story will also inspire them, as I built an empire from nothing, and I encourage all women to do the same.” 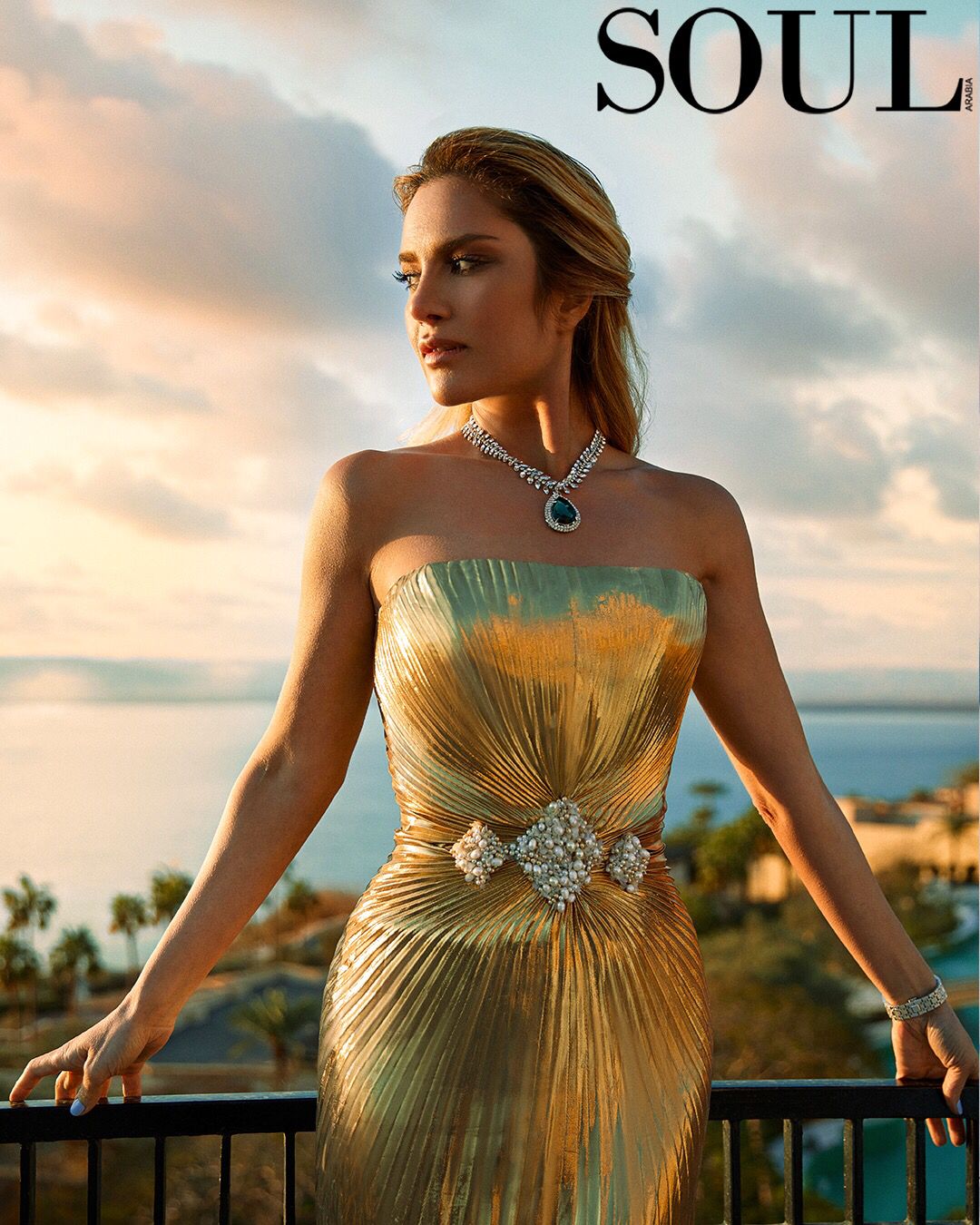 Haya Awad believes that anyone with a unique style is a symbol of fashion and elegance because he makes each piece valuable and distinguishes it in his own way and personality. She also loves to keep up with some of the fashion icons and says: “I love Zuhair Murad’s designs, and adore Elie Saab because every time he showers us with his elegant and versatile designs, all have the same spirit, mark, and style but with a new element, which is no easy feat because it has the potential for continuity in the design.”

Haya Awad does not follow fixed plans to achieve her goals and says in her interview: “My future plans are always changing because I do not like to stay at the same point even if I reach the top, but I always prefer to go back and start over from scratch, even if I change my profession, I will still have the opportunity to start with a new passion, purpose, and lifestyle.” 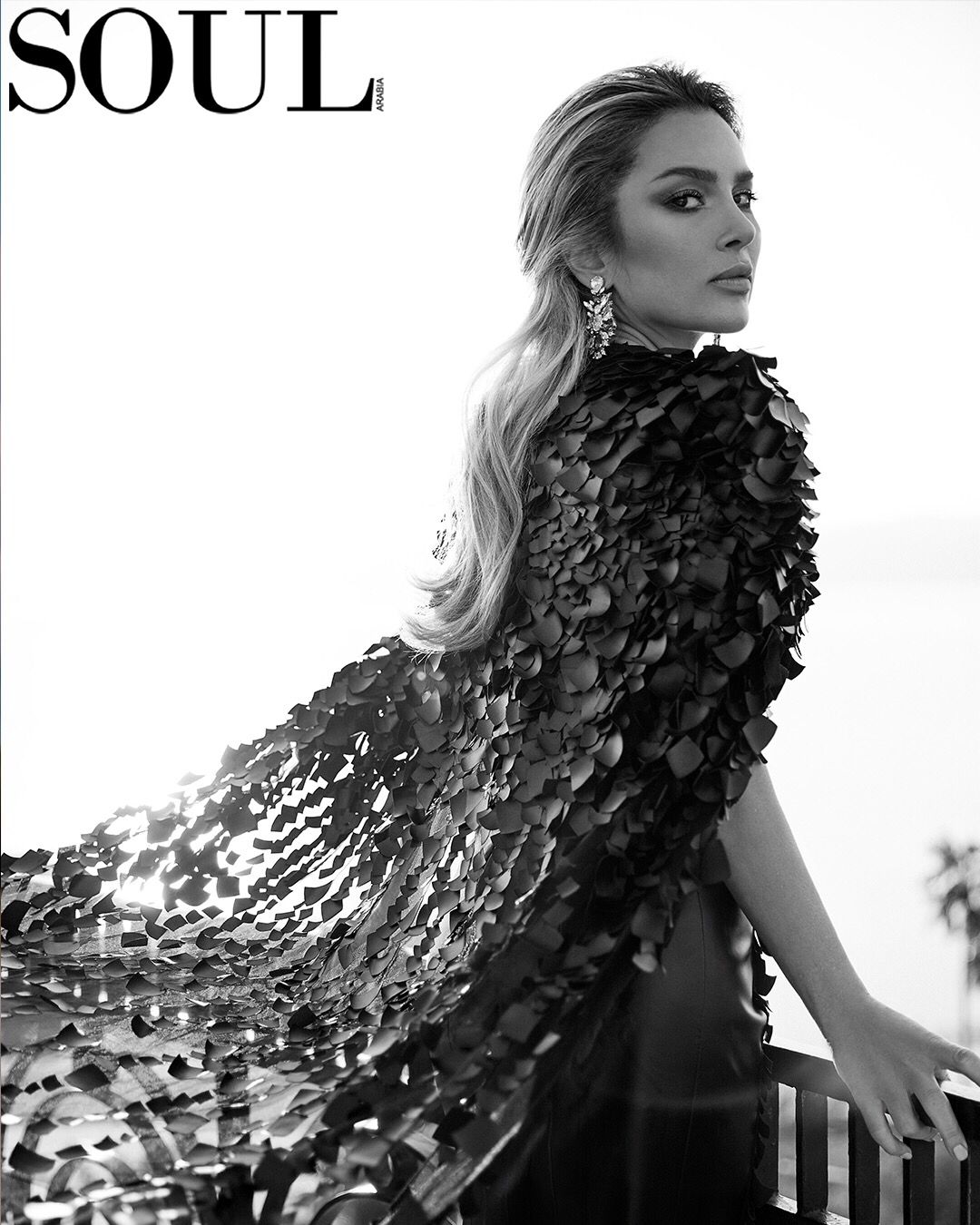